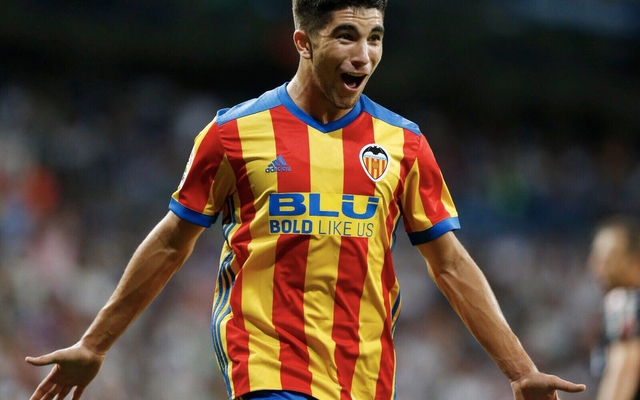 Man Utd could have a problem in midfield next summer, and reports claim that Jose Mourinho has identified a potential solution.

With Michael Carrick, Ander Herrera and Marouane Fellaini all on expiring contracts, it remains to be seen who the club offer extensions too and reach agreements with.

In the event that not all three stay on, Mourinho will need additional quality and depth in that department, and it appears as though he’s set his sights on one player in particular to offer real long-term quality.

According to The Sun, the player is 20-year-old Carlos Soler of Valencia, who is said to be the subject of a possible £30m deal with talks already being started.

The Spaniard has made 30 league appearances already and has represented his country at both U19 and U21 level, showing that he has an exciting future ahead of him with his impressive performances.

It seems as though he’s caught the eye of Mourinho, with United reportedly looking to move swiftly to wrap up a deal and avoid missing out as surely the longer Soler remains at Valencia, the more likely it is there will be interest from other clubs.

In truth, Mourinho may well need to act regardless, as the trio in question above are all approaching or on the wrong side of 30 already, and so long-term options will be needed at Old Trafford eventually.

If Soler has been identified as a player capable of making the step up and being a success at Man Utd, then it looks as though the Premier League giants are going to make their move next year.