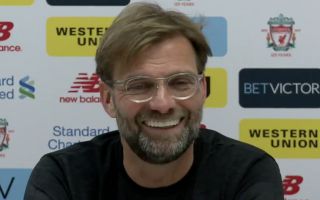 Liverpool are gearing up for a crucial clash with Man Utd at Old Trafford on Saturday, and Jurgen Klopp had positive news on the injury front.

The Reds are in fine form right now, as they’re unbeaten in their last seven in all competitions and have won five of those ahead of a crunch encounter with United in the battle for second place in the Premier League.

Klopp’s men currently trail their old rivals by two points ahead of Saturday’s meeting, and so a win in Manchester would undoubtedly keep them on track to show progress this season and finish as high up the table as possible.

With the Champions League also to consider having swept aside Porto in the last round, the German tactician will undoubtedly be keen to have a full squad at his disposal for the run-in to end the campaign.

It appears as though he’s moving closer to that becoming a reality, as revealed in his press conference on Friday afternoon, as noted by the Liverpool Echo.

The Liverpool boss confirmed that Andy Robertson has overcome a knock he sustained last time out, while Jordan Henderson is likely to get the green-light to feature having suffered a knock of his own against Porto along with Georginio Wijnaldum who had been struggling with an illness.

He added that Nathaniel Clyne won’t come back into the team as he’s still lacking match sharpness after a long injury lay-off, but with Joe Gomez and Trent Alexander-Arnold available in that position, he should be well covered in that department.

In turn, that will be music to the ears of most Liverpool fans as Robertson has been in great form this season, while having several midfield options back will be a major plus with the games coming thick and fast in the coming weeks.

Starting with Man Utd this weekend though, Klopp will be desperate for all three points at Old Trafford.