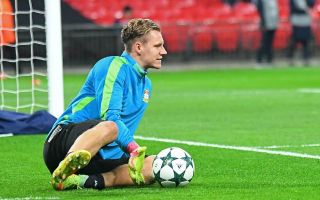 New Arsenal goalkeeper Bernd Leno has been handed the No 19 on his first day of pre-season training, according to the club’s official website.

Petr Cech was handed the No 1 jersey last month, however, Leno will take the No 19 which was previously worn by Santi Cazorla.

READ MORE: World Cup winner odds: Who is the favourite to the win tournament as England are installed second favourites?

As per The Express, the north London club have cited the reasons why the German international has selected the number.

The news outlet said his move cost £19m and the player officially confirmed his move on June 19.

Furthermore, he made his first-team debut aged 19 while on loan at Bayer Leverkusen from Vfb Stuttgart, according to the Arsenal website.

The German international has managed to keep a total of 100 clean sheets in all competitions in just 304 appearances for Bayer, so the Gunners will be hoping he can replicate this form as they bid to return to the top four next season.

The 26-year-old’s reputation as one of Europe’s talented ‘keepers has grown and his performances for Bayer helped the club massively in helping the club secure a fifth placed finish in the Bundesliga last season.