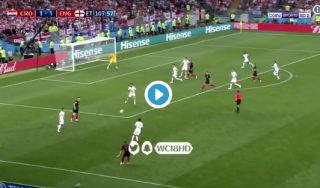 It looks like England’s long, long wait for a World Cup final is going to continue as Croatia have scored a late goal in extra time.

Mario Mandzukic of Juventus broke England hearts with a well-taken finish, though John Stones should surely have done better as he let his man get away from him into space.

Jordan Pickford has had another fine game in goal, making a big save against Mandzukic at the end of the first half of extra time, but there was little he could do here as his defence let him down.

If Croatia do hold on to their 2-1 lead they will reach their first ever World Cup final and play France on Sunday, while England would have to settle for a fight for third place with Belgium on Saturday.