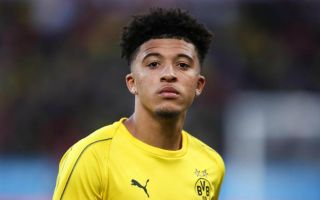 Borussia Dortmund winger Jadon Sancho insists he will remain with the club for many years to come, despite constant transfer rumours.

The 18-year-old starlet has burst onto the scene at the start of the 2018-19 Bundesliga campaign, scoring five goals in 16 matches across all competitions, while also contributing seven assists.

The Englishman’s recent performances earned him up a call-up to Gareth Southgate’s Three Lions squad, with many pundits and experts in the game predicting that the teenager will go on to become a world-class player in the next few years.

Inevitably, as Sancho’s star has risen, so too have reports of him moving on to a bigger club, with The Sun stating on Wednesday that Manchester United and Juventus are interested in signing him next year.

According to Sky Sports, Paris Saint Germain have also joined the race to secure his services, but the Dortmund attacker has come out to address the speculation, confessing that he plans to stay in Germany for the foreseeable future.

“I’m not wasting any thoughts on a change,” Sancho told German publication Bild. “I owe a lot to BVB and I have a lot in mind with this team. I’m happy here and did not sign for so long for nothing.”

Dortmund are top of the Bundesliga after 10 matches, with a huge showdown against Bayern Munich up next on Saturday evening.

Sancho is once again in line to feature and he is confident of another victory to extend their lead at the top of the table, as he added: “By giving everything and giving our fans full throttle, we know how strong the Bavarians are but we also know that can beat them if we have a good day, especially at home.

“We have respect for them but also a lot of self-confidence and we all stick together.”

It looks like the young England prospect may be staying put for now, but with the January transfer window fast approaching there could still be a flurry of bids coming his way, especially if he continues to impress for BVB.