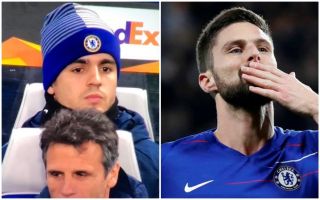 Alvaro Morata did not look like a happy man on the Chelsea bench as he watched on as Olivier Giroud scored a superb brace in today’s first half against PAOK.

A screen grab has been doing the rounds on social media of the Spain international looking miserable as he ponders his own career falling apart before his very eyes.

In fairness, Morata will probably get another opportunity at the weekend due to Giroud getting the nod in midweek, but Maurizio Sarri must be increasingly tempted to make a change up front after Giroud’s performance tonight.

The Frenchman has a first half brace to his name with two superb finishes to surely kill off any hope PAOK have of getting anything out of the game at Stamford Bridge tonight.

Watching another man destroy your career in front of your very eyes… pic.twitter.com/93EPrmutZL