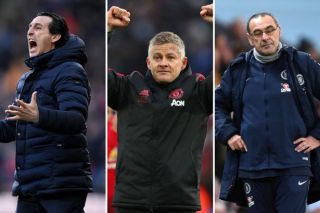 Manchester United manager Ole Gunnar Solskjaer has mocked the likes of Chelsea, Arsenal and Tottenham by labelling them ‘bottlers’ as he predicts his team can finish in the top four.

All four sides chasing a Champions League place are struggling at the moment, with Man Utd winning just two of their last nine games in all competitions and losing the other seven, while Tottenham and Arsenal lost their most recent games and Chelsea drew at home to Burnley on Monday.

United could well benefit from their rivals doing as badly as they are, but there’s no doubt they’ll also need to improve themselves.

Still, according to the Sun, Solskjaer has told his players he sees the others in the race as ‘bottlers’, perhaps in a bid to boost their belief that they can recover from their own poor run of form.

MUFC play Chelsea at Old Trafford today while Arsenal are in action shortly, so we’ll have a bit more of an idea about the state of the top four later this afternoon.