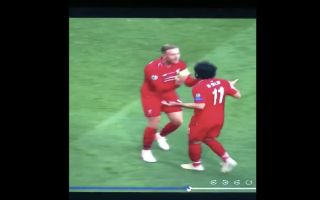 The Reds beat Tottenham 2-0 at Wanda Metropolitano in Madrid thanks to a second minute Mohamed Salah penalty and a late strike from Divock Origi, securing their sixth European crown in the process.

Jurgen Klopp’s men may have lifted the trophy, but they were no means at their best in the showpiece as Spurs controlled possession and played the more incisive football throughout the contest.

Henderson exploded with rage at Salah at one point for not pressing quickly enough, as Liverpool struggled to win the ball back from their Premier League rivals.

Check out the Reds skipper confronting the Egyptian ace below, via Twitter.