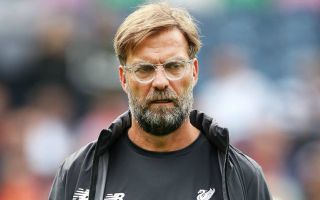 The Reds maintained their 100% win record in the Premier League by beating Arsenal 3-1 thanks to a brace from Mohamed Salah and a goal from Joel Matip. Lucas Torreira netted what turned out to be a mere consolation goal for the Gunners, thus denying the Reds a clean sheet.

SEE MORE: Liverpool and Bayern target won’t be leaving for free next Summer as he agrees new contract with a low release clause

Adrian made a fine save from Nicolas Pepe in the first half but an error from his side almost resulted in Arsenal taking the lead. The 32-year-old rushed out of his goal line and made a poor clearance which saw the ball land on the feet of Pierre-Aubameyang whose shot eventually missed the target.

This is not the first time the Spaniard has made an error for Liverpool, having gifted a goal to Southampton last weekend.

Lawrenson has said that he is concerned about Adrian in goal. As quoted by The Express, the Irishman told LFC TV: “The goalkeeper worries me. I just think he’s sort of, last two games, made the mistake at Southampton when he shouldn’t have been under any pressure and he got away with a big one today.

“He should have let [Virgil] Van Dijk just sort that situation out and he came running off his line. He just worries me a bit and I know he’s experienced and everything but there’s a reason why nobody else was taking him. I get that [that Adrian hasn’t played with the Liverpool players for long] but do you know something, that decision he made today doesn’t matter whether you’ve been there a minute or a thousand minutes with somebody, it’s his decision making.

“Obviously the one act Southampton as well and I think the manager will obviously always, always back him because Alisson’s probably not fit until after the international break. But he just worries me a little bit.”

Liverpool are yet to lose any match this season with Adrian in goal but the 32-year-old has made some reckless errors which he should avoid doing in upcoming matches.

The Reds next face Burnley at Turf Moor on Saturday.