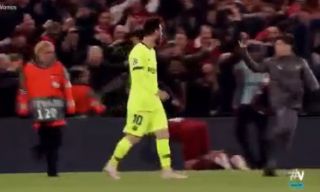 These Liverpool fans surely win the award for the worst tweet of the day as they troll Barcelona superstar and all-round footballing legend Lionel Messi.

The Argentine is one of the greatest footballers of all time and has been a joy to watch for over a decade now, as today marks 15 years since he made his Barca debut.

15 years ago today, Lionel Messi made his Barcelona debut

All the best, Leo pic.twitter.com/IoY5VIIvUi

As you can see above, Liverpool fan account The Anfield Wrap chose to troll Messi on this landmark day, showing a video of the player in Barcelona’s 4-0 defeat away to the Reds in last season’s Champions League semi-final.

The clip shows one Liverpool fan running on to the pitch and swearing at Messi – an ugly and disrespectful gesture towards such a great player, even if this was understandably an emotional moment for everyone at Anfield.