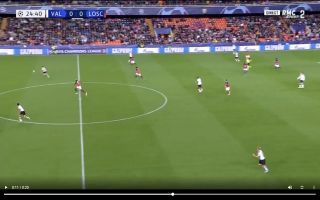 Barcelona target Victor Osimhen has announced himself on the big stage with a superb goal for Lille against Valencia, showing unreal pace before scoring.

In the 24th minute of this evening’s Champions League clash between Valencia and Lille, Victor Osimhen showed electric speed to latch on to the ball after it was deflected upfield by Benjamin Andre.

The youngster absolutely burned Valencia’s defenders with his pace – despite their considerable head start, before slotting the ball into the back of the net.

Spanish outlet AS revealed last month that the talented forward was on Barcelona’s shortlist to replace superstar Luiz Suarez.

Take a look at the Nigerian star’s superb run before scoring below:

Osimhen's speed for his goal >>>>>>pic.twitter.com/MFI6jsIDBB

Barcelona don’t need to look any other further than this goal to see that the youngster is a serious talent.

The 20-year-old was recently crowned as the Ligue 1 Player of the Month following his prolific displays. Osimhen has seven goals and two assists in 12 league appearances so far this season.