Liverpool reportedly have a trio of defensive targets on their transfer shortlist as Jurgen Klopp could be in the market for a replacement for Dejan Lovren this summer.

The 30-year-old Croatian stalwart has been limited to just 14 appearances so far this season, as he has fallen down the pecking order at Anfield under Klopp.

AS claim that he’s out of contract at the end of the season, and with that in mind, the Merseyside giants could be looking for a replacement this summer.

The report goes on to add that Atletico Madrid ace Jose Gimenez, Inter’s Alessandro Bastoni and RB Leipzig star Dayot Upamecano are the three names on their transfer shortlist to shore up their backline by adding more quality and depth.

It won’t be cheap to acquire any of the three names in question though, as AS note that Gimenez has a €120m release clause in his current contract, while the Express report that Upamecano could cost over £50m (€53.4m) to prise away from Leipzig.

As per Transfermarkt, Bastoni is currently valued at €31.5m, and so Liverpool will no doubt assess their options carefully before splashing out.

The Reds are on course to win a Premier League title this season to add to the other trophies that they’ve collected dating back to last year.

In turn, they are in a strong position now to attract top players and to build around the quality core that they already have in place in Klopp’s squad.

That will only make them more dangerous and daunting to their rivals moving forward, and getting an upgrade on Lovren will no doubt make them stronger next season as they look to compete on multiple fronts once again. 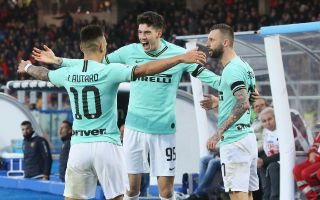