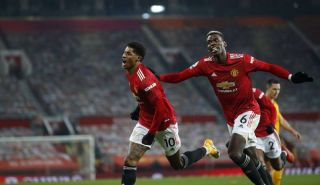 Manchester United forward and 2020’s unsung hero Marcus Rashford has issued a rallying cry to his team mates to finally end their silverware drought in the second-half of the 2020-21 season.

Rashford, 23, has spent his entire career at United after joining their youth academy back in 2005.

The Manchester born and bred superstar has enjoyed a monumental rise to the top of European footballing prominence and has already racked up over 80 senior first-team goals for the Red Devils.

The United squad currently find themselves in second place in the Premier League table, three-points behind leaders and arch-rivals Liverpool, but with a game in-hand.

United’s impressive domestic form is in stark contrast to where they have found themselves in recent seasons and after a seven-year long Premier League title draught, could this season really be the campaign we see the Red Devils on top once again?

Currently preparing for an important clash against Aston Villa later on Friday, Rashford has spoken out about the Reds’ trophy ambitions.

“The platform has been there for a while and in this last year we’ve taken greater steps forward which is obviously a positive for us,” Rashford told ManUtd. “We missed out on winning some trophies, losing in the semi-finals and that’s what we need to correct in the coming year and make sure we get over the line and win trophies.

“That’s the next thing for us to do as a team then it’s about doing it consistently and being able to repeat it back-to-back which is more difficult than getting it the first time.

“We’ve still got a long journey ahead of us, but at the moment we’re in a good place and we’re concentrating on ourselves and our team and just trying to improve ourselves in each game.”