Could David Moyes be the next manager of Newcastle United…

It was a humiliating afternoon for Newcastle United manager Alan Pardew, as his side were thrashed 4-0 at his former club Southampton, and speculation is mounting regarding his future.

Former Manchester Untied and Everton boss David Moyes is currently the bookies favourite to be the next Magpies manager, should time be called on Pardew’s reign by owner Mike Ashley.

Pardew is contracted to the club until 2020, and is likely to demand a fairly hefty pay-off if the club decides he should be relieved of his position.

But with the club yet to win this season, and the fans demanding a change, there is every possibility that the Newcastle chief’s hand could be forced – with United rock bottom of the Premier League table with two points.

Here are the top five potential replacements for Pardew: 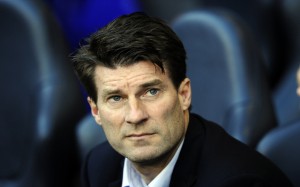 The former Swansea City boss led the Welsh club to Capital One Cup glory during his brief stint in charge, while the Swans remained comfortably clear of the relegation zone under his guidance. The Dane is currently contracted to Lekhwiya SC in Qatar, but could surely be lured back to the Premier League if the right job was offered.