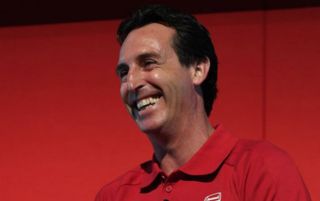 Barcelona forward Ousmane Dembele has been pictured with several Arsenal stars which has seemingly sparked some excitement amongst a section of the Gunners faithful.

As noted by The Express, the 21-year-old has been linked with a move to the Emirates this summer after struggling to make a positive impact in his first season at Barca.

Injuries weren’t kind on him as he was sidelined for a significant period of the campaign, but naturally for a player still so young, short of match fitness and adapting to a new country and club, it was difficult for him to showcase his full quality at the Nou Camp.

Perhaps with 12 months under his belt, he will feel confident of showing improvement next season, but after Pierre-Emerick Aubameyang’s father shared the image below on Instagram, it had a number of Arsenal fans dreaming that he could be heading to north London this summer instead.

Naturally, there is likely to be an innocent explanation for it as not only does it look a like a family party, but there is a Borussia Dortmund connection too while Dembele is joined by compatriots Alexandre Lacazette and Matteo Guendouzi.

In turn, it’s certainly nothing like confirmation of a move to Arsenal nor does it suggest that something could be imminent as the club haven’t commented on any further signings. Nevertheless, it was enough to get the Arsenal fans below thinking that something might be brewing and so with a week to go before the deadline, it remains to be seen if something develops.

Dembele is literally chilling with the Arsenal boys. Come on @Arsenal let’s get him onboard.? pic.twitter.com/DkZpNHKfu1

? | Ousmane Dembele hanging out with the Arsenal lads. #afc pic.twitter.com/JLektZpJEB

Dembele is in London ?? pic.twitter.com/zru2Sq9lW6

Aubameyang’s father on instagram. Look at the picture closely. ? pic.twitter.com/C6BBBUSCMj