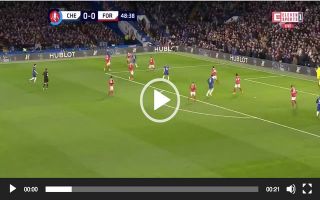 The magic of the FA Cup was on full display during Chelsea’s clash against Nottingham Forest this afternoon, Alvaro Morata was the recipient of some much-needed luck.

In the 49th minute of the clash Chelsea’s teenage sensation Callum Hudson-Odoi left Manchester United academy graduate Saidy Janko on ice-skates before firing a cross into the path of Morata.

Morata got in front of his man to volley a shot into the back of the net from close range.

It’s easy to see why German giants Bayern Munich are interested in signing the talented youngster, according to Sky Sports the Bavarians had a bid in excess of £30m rejected by the Blues.

This goal could work wonders for Morata. If Morata can get his confidence back, the Blues may have finally solved their problems in front of goal.

Maurizio Sarri has a good chance of winning silverware in his debut season at Stamford Bridge.

After Morata’s goal the Blues look all set to progress through to the next round of the FA Cup and they are also within touching distance of League Cup glory.