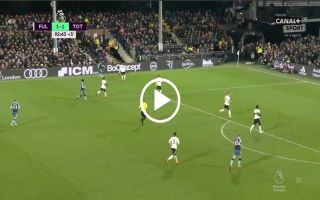 Tottenham midfielder Harry Winks became the hero for Spurs today when he scored a last-gasp winner for Mauricio Pochettino’s side in the 93rd minute of their clash with Fulham.

In the dying moments of the game Georges-Kevin Nkoudou whipped in a cross from the wing and Winks made a smart run to get in front of his marker and head into the back of the net to complete a comeback for Tottenham.

This was Nkoudou’s first assist for Spurs since joining in 2016, what a time to come up with the goods.

Tottenham were in desperate need of a new hero with Harry Kane out injured, the talisman has been ruled out until March with an ankle injury, according to Sky Sports.

With Winks’ heroics in the last-second, Tottenham have continued their run of not drawing a single Premier League game this season.

YESSSSS!!!!
Who needs Kane when you have Winks?!

A man called Harry, has won the game for Tottenham. It’s not Kane, it’s Winks!!

These commentators are mad ??#FULTOT #PL

WHO NEEDS HARRY KANE WHEN YOUVE GOT HARRY WINKS. YOU BEAUTYYYYYYYY

When you don’t have Harry, you always have HARRY!! One of our own. #WINKS #COYS.

#COYS Who needs Kane, Winks all the way right at the end.

Who needs Harry Kane when you’ve got Harry winks