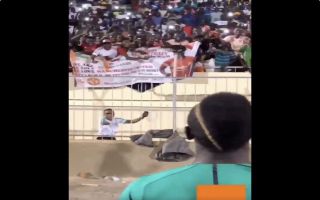 The Lions of Teranga beat Equatorial Guinea 1-0 in an African Cup of Nations qualifying match on Monday night and after the game, Liverpool winger Mane sent a message to the away supporters.

A section of Senegalese fans were holding up a banner which displayed an image of Napoli defender Koulibaly, with a caption urging him to secure a transfer to Old Trafford this summer.

According to the Manchester United Evening News, Koulibaly is a primary transfer target for United, but Mane’s hilarious reaction to the sign indicates he is definitely not supporting the proposed move.

The Liverpool superstar simply smiled and gave a thumbs down gesture as he approached his country’s fans, which sparked plenty of laughter in the stands.

Sadio Mané’s thumbs down reaction when he saw the fan’s banner “Koulibaly, Come to United”. What a legend. ?? pic.twitter.com/UcLR9rn5AE