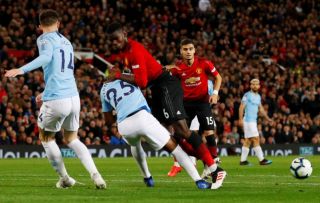 Manchester City may have won their hardest remaining fixture on paper against Manchester United tonight, but Liverpool fans can at least cling to one positive – the injury to key midfielder Fernandinho.

The Brazilian veteran has been immense for Pep Guardiola’s side this term, but had to go off in the second half of tonight’s victory at Old Trafford.

With another hugely important City player in Kevin De Bruyne already looks set to miss the title run-in through injury, according to the Sun, and Fernandinho could be missed even more if he’s out for any lengthy period.

The 33-year-old had a brief spell out of the side through injury earlier this season and City really suffered in that period as they lost against the likes of Crystal Palace, Leicester City and Newcastle to fall behind Liverpool in the title race.

However, they have since recovered with his return, so it could be worrying news for Guardiola if he misses any of their upcoming fixtures.

Liverpool fans will hope for any slice of luck they can get now, and there may be cause for optimism from tonight’s news, though the severity of the injury is not yet clear.