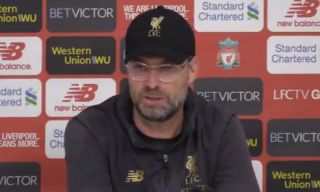 The Reds beat Wolves 2-0 to finish on 97 points in the league this season, but they were ultimately one point off Manchester City, who retained their title with a 4-1 win away to Brighton.

Speaking after the game in the video above, Klopp made reference to mocking fans who taunt Liverpool for their long title drought, which stretches back to 1990.

Given that that trolling will mostly come from LFC’s bitter rivals Man Utd, the German tactician seemed to take a jibe in their direction by saying those who mock the club’s title drought have worse problems themselves.

This is certainly true of United, who lost 2-0 at home to Cardiff to finish 6th in the table today – a whopping 32 points off champions City, and with no silverware in the cabinet this term.

Liverpool, meanwhile, can be proud to have picked up one of the best points totals ever, while they also still have a Champions League final against Tottenham to play on the 1st of June.