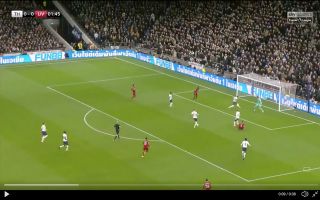 Liverpool star Roberto Firmino broke free before firing a shot towards goal, Spurs keeper Paulo Gazzaniga was left rooted to his spot and it looked as though the Reds has taken the lead.

20-year-old Tanganga dove down to the floor to block the Brazilian’s attempt.

Take a look at Mourinho’s hilarious reason for handing the ace his surprise PL debut against the league leaders.

Check out the crucial block below:

Liverpool slice through Spurs early on but the debutant makes a crucial block before #LFC hit the post!

The England youth international put his body on the line for his boyhood club, hats off to the ace.