It’s understandable that some teams were trying to force some players out the door to save on wages or raise funds in the transfer window, but you might as well make use of anyone under contract once the window shuts.

Things haven’t worked out for Ousmane Dembele at Barcelona since his big move from Borussia Dortmund, as everything just seems to go against him.

He’s always struggling for fitness which is the biggest issue, but he’s never really been a first choice starter and it now looks like Ansu Fati has taken his role in the team.

Spanish outlet Sport reported on his latest situation after he decided to turn down a move to Man United in the transfer window, and it’s clear that he’s doing all he can to try and win Ronald Koeman over.

READ MORE: Barcelona’s board try to undermine vote of no confidence by reporting some fans to the police

They confirm that the players were given a few days off over the international break, but Dembele has come in to do extra training on his own in a bid to improve his fitness and force his way back into the team.

They claim he’s been accused of being unprofessional with his approach to fitness and training in the past so it’s clear that he’s got a lot of work to do if he wants to shake that reputation, but it would be great if he can stay fit and earn another chance. 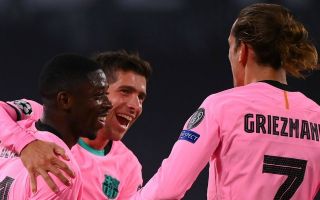