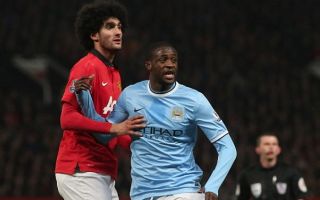 Marseille are keen to bolster their midfield this summer and have reportedly held transfer talks with Manchester United’s Marouane Fellaini.

Belgian Fellaini is a divisive figure at Old Trafford. Some fans appreciate his work-rate and aerial progress but many view him as unfashionable and not the sort of player who should be at United.

Manager Jose Mourinho appears to be an admirer but has not been able to convince the 30-year-old to sign an extension to his contract which is set to expire at the end of June.

Fellaini is free to talk to other clubs and has done just that with Marseille, according to L’Equipe, but the publication also reports that his wage demands have put the nine-time Ligue 1 champions off.

L’Equipe add that AC Milan and Atletico Madrid are now the frontrunners in the race to sign Fellaini, although he could yet remain at Old Trafford.

With Fellaini’s personal terms deemed excessive, Marseille are said to be looking elsewhere, with L’Equipe claiming that Manchester City icon Yaya Toure is now a target.

Like Fellaini, Toure is out of contract this summer. The 35-year-old has been widely tipped to move to China, but the Far East does not appeal according to L’Equipe, which could give Marseille a chance.

READ MORE: Jesse Lingard treats himself to a drink in Mykonos while Man Utd team-mate holidays with Tottenham flop in Spain