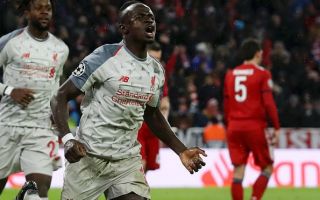 Sadio Mane has reportedly made history for Liverpool tonight by becoming their all-time leading scorer in Champions League and European Cup away games.

Clearly the man for the big occasion, the Senegal international netted twice in a superb 3-1 win for Liverpool at Bayern Munich in the Allianz Arena to help the club through to the Champions League quarter-finals.

In doing so, Mane has made a hugely impressive piece of history for the Reds, as noted in the tweet above by Opta, cementing his place as a true great in this exciting Jurgen Klopp side.

While Mohamed Salah and Roberto Firmino tended to get most of the plaudits in last season’s run to the Champions League final, Mane hit a hat trick away to Porto and also scored LFC’s only goal in the final defeat to Real Madrid.

This season, he’s really come into his own, with Salah and Firmino suffering slight dips in form, but Mane carrying this side at the moment.

What an achievement from a great player finally getting the recognition he deserves.