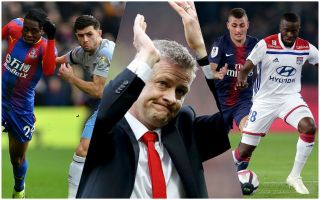 Manchester United are reportedly making progress in four huge transfer deals to give Ole Gunnar Solskjaer a hugely improved XI to challenge for the Premier League title next season.

The Red Devils had a dire end to the 2018/19 campaign and look in need of a major revamp this summer, with plenty of big names being linked with the club as ever.

The latest is that four players worth around £265million in total look to be making progress on potential moves to Old Trafford.

Here are the details…

Reportedly close to a £60m move to Man Utd from Crystal Palace, Aaron Wan-Bissaka has long been linked with MUFC and seems ideal to be their long-term replacement for Antonio Valencia.

The 21-year-old is a huge talent and seems an ideal fit in Solskjaer’s attack-minded side, as he’ll bring more quality going forward from the full-back position.

Click here to read up on why Wan-Bissaka is a crucial signing for United in their attempts to emulate Liverpool’s success.

Bruno Fernandes to Manchester United is a deal we’ve been hearing a lot about, and it may have just taken a step closer to completion as Tottenham have reportedly pulled out of the race for his signature.

Sky Sports today claimed the £65m-rated Sporting Lisbon star is no longer a top target for Spurs, leaving Man Utd with one less rival in this transfer battle.

The Red Devils have perhaps been most strongly linked with the Portugal international, and can now focus their energy on that as the Wan-Bissaka deal edges closer to completion as well.