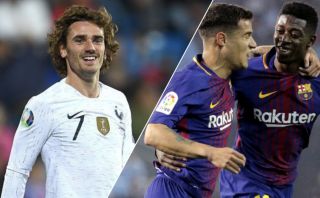 Antoine Griezmann completed his long-awaited transfer to Barcelona from Atletico Madrid earlier today, with the Frenchman now set to pen a five-year deal with the Catalan giants.

According to the club’s official website, Griezmann completed his move to the club after they paid his €120M release clause, with the player now set to sign a five-year contract.

The move is a huge coup for Ernesto Valverde’s side, as it finally looks as if they’ve brought in a long-term replacement for ageing striker Luis Suarez.

Griezmann’s arrival now surely means that Suarez’s time in Barca’s starting XI is all but over, news that will be hard for the Uruguayan to take.

And it looks Suarez may not be the only Barca player affected by Griezmann’s arrival.

According to AS, Griezmann looks set to take the no.7 shirt at Barcelona, one that is currently owned by Coutinho, as the Frenchman is unlikely going to want to pick a number other than the one he’s used his entire career.

This doesn’t spell good news for Coutinho, as it seems like this could be an attempt from Barca to try and force him out the club, with Liverpool Echo even stating that Griezmann taking the no.7 shirt from Coutinho could be a hint that the Brazilian’s time with the club is up.

Griezmann’s new shirt number could be bad news for Coutinho

Coutinho’s time with the Blaugrana has been somewhat of a disaster, with the Brazilian struggling dearly to adapt to life in Spain following his move from Liverpool in January 2018.

Given this, we’re sure a lot of Barca fans will be hoping that this is in fact a hint from the club regarding Coutinho’s potential departure, as selling him would see the club recoup some of the money they spent on Griezmann, as well as getting some pretty hefty wages off their books.