Rebekah Vardy is not having a good day.

Earlier on Wednesday, Coleen Rooney, the WAG of former Manchester United and England captain Wayne Rooney, released a statement on Twitter slamming Vardy for leaking her private Instagram stories to the Sun newspaper.

Coleen also explained in detail how she tested her suspicions against Rebekah by blocking everyone else except her and creating false stories for her to pass on to the tabloid.

This really doesn’t look good for Rebekah, and it’s been the talk of Twitter all day.

To make matters worse, some of her old tweets are now being uncovered and one of them is particularly poor from her as she recounted being allegedly followed by a ‘weird black man’. 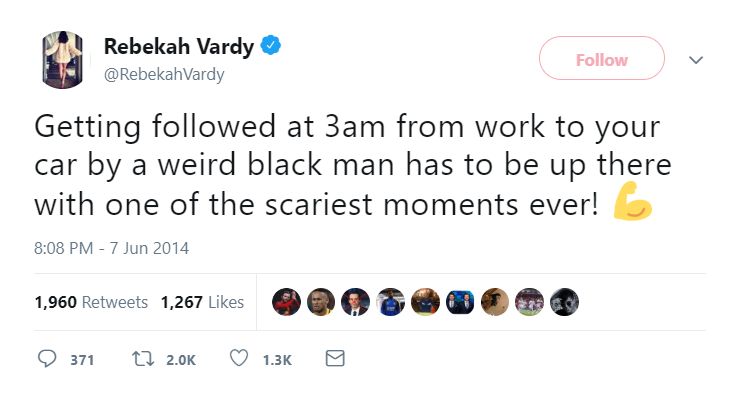 Of course, being stalked or followed is no laughing matter, but the fact that she felt the need to mention the man’s race is not going down well online.

Rebekah vardy is a racist pass it on https://t.co/V4Y8HrOCaD

Not only are you a snitch, but you're also a racist? Jamie Vardy ought to have done better.

I’m stepping into this football drama to say, Vardy is a vile misogynistic racist women and I’m glad the worst is happening to her x