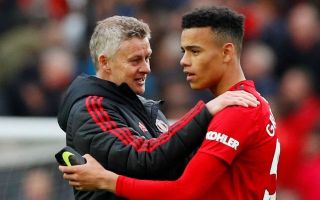 The 18-year-old has become more of a regular in the Man Utd first-team this season, having shone for the club at academy level for some time.

It remains to be seen if Greenwood can definitely make a career for himself at Old Trafford, but he looks a player with enormous potential.

On top of that, he’s lucky to be playing under a manager like Solskjaer, who clearly sees the value of promoting from within, having also given first-team chances to academy products like Angel Gomes, Brandon Williams and James Garner.

Speaking to the Daily Mail, Greenwood says Solskjaer is a nice guy, but also says he’s watched him as a player.

The teenage forward also named current team-mate Rashford as another of his role models, so he’s certainly got plenty of quality names to learn from as he continues his development.

“The manager is a really nice person,” Greenwood told the Mail.

“Obviously he was a great goalscorer at United and I know about him, I’ve watched him. He’s a great manager in my eyes.

“I’ve got so many role models around me and Marcus is another one. I just want to follow in his footsteps.”